The worldwide Covid-19 (Corona Virus) pandemic is impacting every sector of the US and virtually every country in the world in regards to their economies. Every month, US retail sales numbers are released to the public that show how much the American public has spent in that particular month on a wide range of products and services, from retail, food services, furniture and clothing.

The next announcement of US retail numbers will be made public on February 17th at 8:30 AM ET and many investors and corporations are anxiously awaiting the news. If the news that is made public shows an increase in retail sales numbers, the stock market would see a positive increase to many different types of stocks, such as retail, food & beverage and clothing for example. An increase in retail sales number in January when compared to December would signal to all investors that although the pandemic is still a significant hindrance, its impact is slowly declining and is an indication of an overall improving economy. 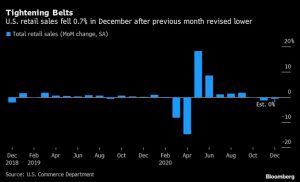 If the news that is released shows a further decline in US retail sales numbers, then the same stocks that would have increased on positive news would also be the stocks that would decline. The reason they will decline on negative news is the opposite of why they will increase on positive news. It will show that although corona virus cases are declining, consumer spending is still lagging behind and also signifies that Americans financial situation is yet to improve, with many people remaining unemployed and simply unable to afford the luxury of spending.

As more and more Americans become vaccinated against the Corona Virus and become employed, US retail spending would start to increase. The increase in US retail sales numbers in the coming months will not signify a fully improved and strong economy, but the positive increases in sales numbers will show that aggregate spending is a result of an improving economy, increasing employment, and thus, the improvement of US stock indices. 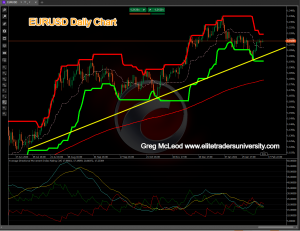 HOW TO TRADE THE RETAIL SALES RELEASE

As forecasts call for retail sales to have risen from -0.7% in December to 1.1% in January, look for a possible rise in the EURUSD from the 1.2000 area to the 1.2350 zone (December 23rd high). However, if the retail sales number come in lower, look for the dollar to rally against the Euro with the EURUSD retesting 1.1800 (Daily 200 SMA)

If you are ready to invest in your education and become an ELITE Trader, then learn more about a special opportunity to work with Greg McLeod. Click Here to learn more,